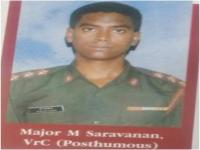 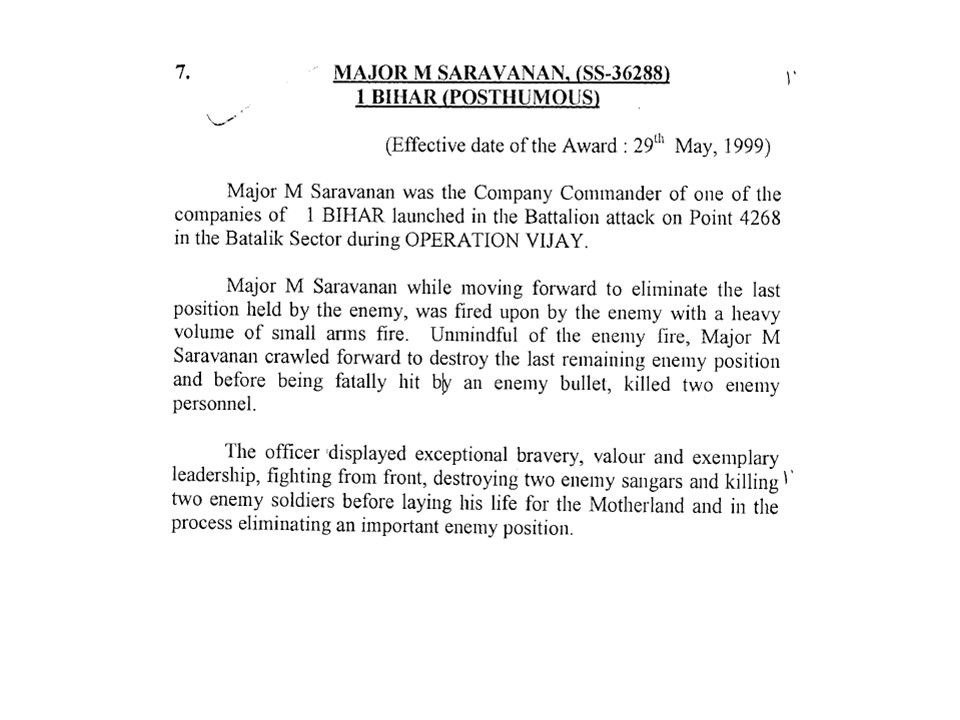 Major M Saravanan was born on 10 Aug 1972 in Rameshwaram in Tamilnadu. son of an army

officer Lt Col Adi Mariappan and Amrithavalli Mariyappan, Maj Saravanan had made up his mind

to follow in the footsteps of  his father since his childhood. His father Lt. Colonel Adi Mariappan a

doctor in the army died in a road accident in Bangalore in 1989, while serving in the Indian Peace

Jorhat, and Bihar, had joined St Joseph’s College in Tiruchirapalli which was founded in 1844. Maj

Saravanan during his college days was also the president of the student union at St. Joseph’s

College in 1992 and was a C certificate holder of NCC. Maj Saravanan graduated from the OTA in

1995 and was commissioned into 1 Bihar of the Bihar Regiment, a regiment known for its

numerous battle honours. After passing out of OTA, he was posted to Tamulpur, Cooch Bihar, and

Bhutan before moving to Kargil. He was promoted to the rank of captain in 1996 and major in

1999. He wrote to his mother that he had been waiting for just such an opportunity and would

bring home a “Vir Chakra”. Operation Vijay was launched on 26 May and his unit was tasked to

capture Point 4268 in Jubar Ridge located on the western side of the Batalik sector, the second

highest battlefield in the world after Siachen. The terrain comprised of jagged rocks covered with

snow and knife-edge ridges with no greenery.

Following the failure of two attacks, Major Saravanan volunteered to launch the third attack. A

frontal attack was the only way. The enemy was well entrenched on heights but the steep climb

did not deter him. The attack was launched at 4 a.m. on 29 May with his final command to the

men, “Do or Die”. He killed two enemy soldiers by firing a rocket launcher and was wounded in the

stomach by shrapnel, but he did not give up. His commanding officer asked him to fall back in view

of many casualties. Maj Saravanan replied that he was close to the objective and would not spare

the enemy who had killed his men. He added, ‘Nothing will happen to your Genghis’, which was

his code name. He charged through a hail of bullets and killed two more enemy soldiers. He was

the first to reach the top but received a bullet injury in the head at 6.30 a.m. and fell into a ravine.

His unit 1 Bihar took an oath to capture Point 4268, which they did by 6 July. Major Saravanan’s

body could be recovered, 37 days after his death, following a bitter fight. The entire Jubar ridge

was cleared by 8 July.

feet of his mother. Hundreds of garlands were placed on it and thousands of people came to pay

homage  to the hero of Batalik-  the first officer casualty of Operation Vijay. He was posthumously

awarded the Vir Chakra and it was presented to his mother by President K Narayanan.

Major M Saravanan is survived by his mother Amrithavalli Mariyappan, and two sisters Chitra and 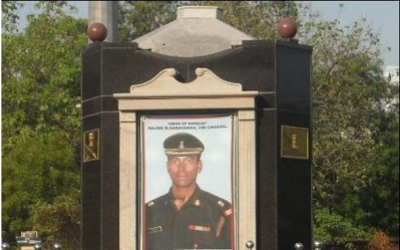